From PrEP to Telehealth – Improving Care for Rural Illinois Patients

In rural Illinois, a general practitioner treats persons of all ages from birth to old age, providing continuity of care valuable to many in the community. However, this continuity may present a privacy concern for a person living with HIV, or at risk of HIV, who might fear disclosure of their status when obtaining a prescription for treatment or preventive medications. HIV infection risk can be significantly lowered by taking pre-exposure prophylaxis (PrEP).

“Many of these rural communities may only have one clinical practice. That practice may have delivered you as a child 22 years ago,” said Wiley Jenkins, who has a doctoral degree in public health. He is division chief, epidemiology and biostatistics, at Southern Illinois University School of Medicine’s Department of Population Science and Policy in Springfield, Illinois. “People may or may not have seen the same doctor their entire life. But in many rural areas, it seems that everyone really does know everyone.”

To address this concern and other health care-related challenges experienced by the rural Illinois community, Jenkins and his team at the SIU School of Medicine developed a coalition called RuralHarmony. It was established in 2021 and also includes colleagues at Northwestern University and two southern Illinois HIV advocacy and service organizations, The Community Action Place and Rainbow Café. 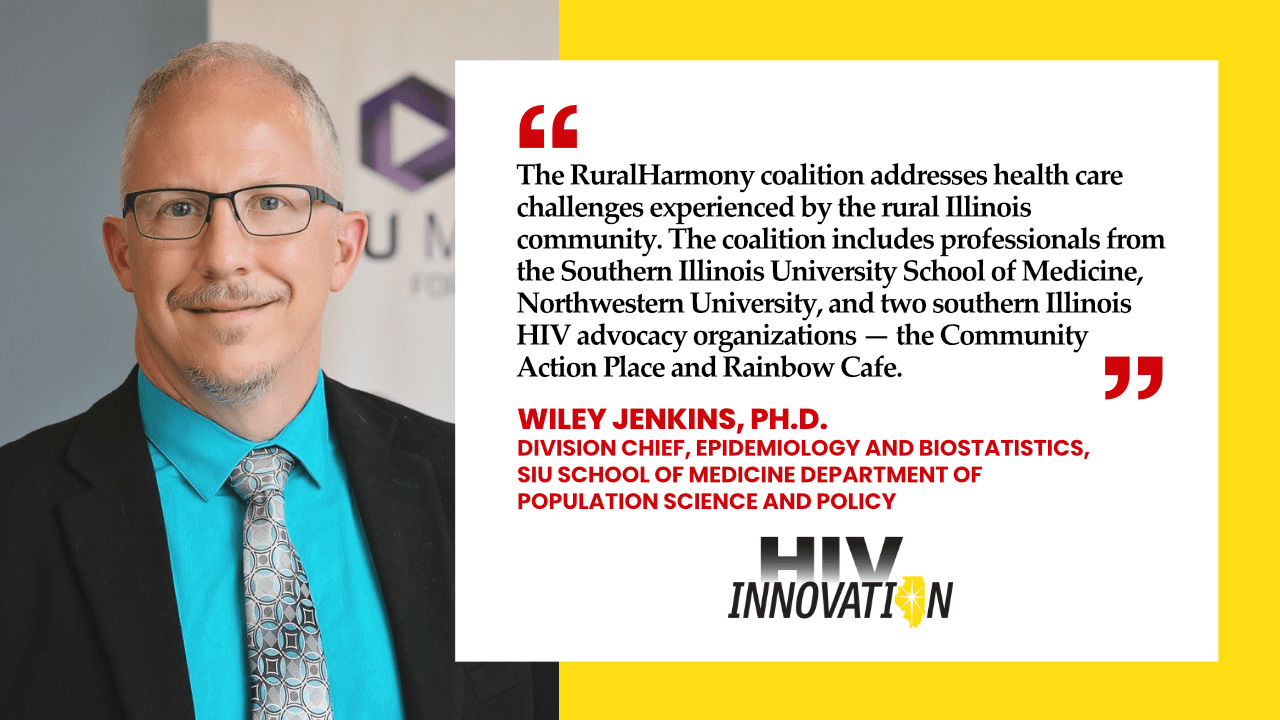 Survey results provide insights on PrEP use, pinpoint the need for telehealth

RuralHarmony recently launched an online survey to learn more about the risk for HIV and sexually transmitted disease, risky behaviors such as drug and alcohol use, healthcare experiences and stigma, and PrEP knowledge and use in rural southern Illinois.

Response to the survey surpassed Jenkins’ expectations, with nearly 400 responses from individuals living in 21 southern Illinois counties during four weeks in summer 2021. Among other findings, the preliminary survey results showed that 49% of increased-risk respondents had not disclosed their sexual identity to their provider. In addition, only 8% of respondents who were potentially eligible for PrEP have had a conversation with their provider about the drug. Other studies have found that about 25% of individuals who talk with their doctors about PrEP are eligible to take the drug.

“For us, these data mean people aren’t even telling their doctor about their HIV risk and aren’t talking about their eligibility for PrEP,” Jenkins said. “In many communities, the fear is real that talking about something like this will get out because your English teacher’s husband could be the receptionist at the clinic.

“In many politically and religiously conservative areas, stigma also limits people overall. That situation led us to ask, ‘can we connect these individuals with people they are willing to talk to about their HIV risk?'” This realization pointed to the need for telehealth services.

The acceptance of telehealth provides a workable option to obtain PrEP

The COVID pandemic expanded the use and acceptance of telehealth across the country. With his research results indicating the need for more conversations about PrEP in the 21 counties represented, Jenkins concluded persons at risk for HIV don’t have to see their personal doctor face-to-face for the proper prescription.

He is developing a grant proposal to work with a telehealth partner to make PrEP available to individuals who either can’t or don’t want to discuss it with their doctor. The grant will cover a multi-county area to see if this approach will work.

“As the first step, we have to make PrEP available since so many people don’t even tell their doctor,” Jenkins explained. “We want to say, ‘Hey, you know, you can talk to us.’ Someone who is nonjudgmental about sexual and drug use activity, who has knowledge and structured their practice to be respectful and culturally competent; this is someone you can talk to.”

The southern 16 counties of Illinois comprise more than 6,000 square miles with a population of about 330,000 persons. “We have to have partners in multiple places that can cover a lot of ground,” Jenkins said. He cited The Community Action Place and Rainbow Café as two main partners that can provide outreach to the population now and, most likely, in the future with telehealth PrEP.

The Community Action Place has multiple office locations and covers at least 11 Illinois counties using three vans. These vehicles potentially could facilitate PrEP because they have staff trained to collect biological specimens; anyone taking the drug must have blood work that also includes screening for sexually transmitted infections.

Rainbow Cafe in Carbondale is the primary resource for the LGBTQ+ population in southern Illinois, Jenkins said, with advocacy, outreach and services for this community, including a new program for individuals 51 and older. “With these two strong partners, we can get the word out to a lot of people about PrEP,” he emphasized.

The push for the use of PrEP comes down to survival. This drug reduces the risk of getting HIV from sex by about 99% when taken as prescribed and reduces the risk of acquiring HIV via injection drug use by more than 70%, according to recent research studies. Jenkins concluded: “That’s where PrEP comes in because it substantially reduces your risk of HIV regardless of your behaviors.”