Understanding how the human immunodeficiency virus (HIV) decides to turn on or turn off in a single host cell offers researchers a pathway to prevent the spread of HIV at the cellular level. When HIV infects human T-cells, it integrates into the cell’s genome, where HIV decides to either replicate or remain dormant. The ability of a virus to remain quiet, or dormant, within a host cell is known as latency.

HIV latency is a major barrier to a cure, as antiretroviral therapy (ART) inhibits active replication of new virus, but upon its removal, latent HIV can reactivate and start replicating again. 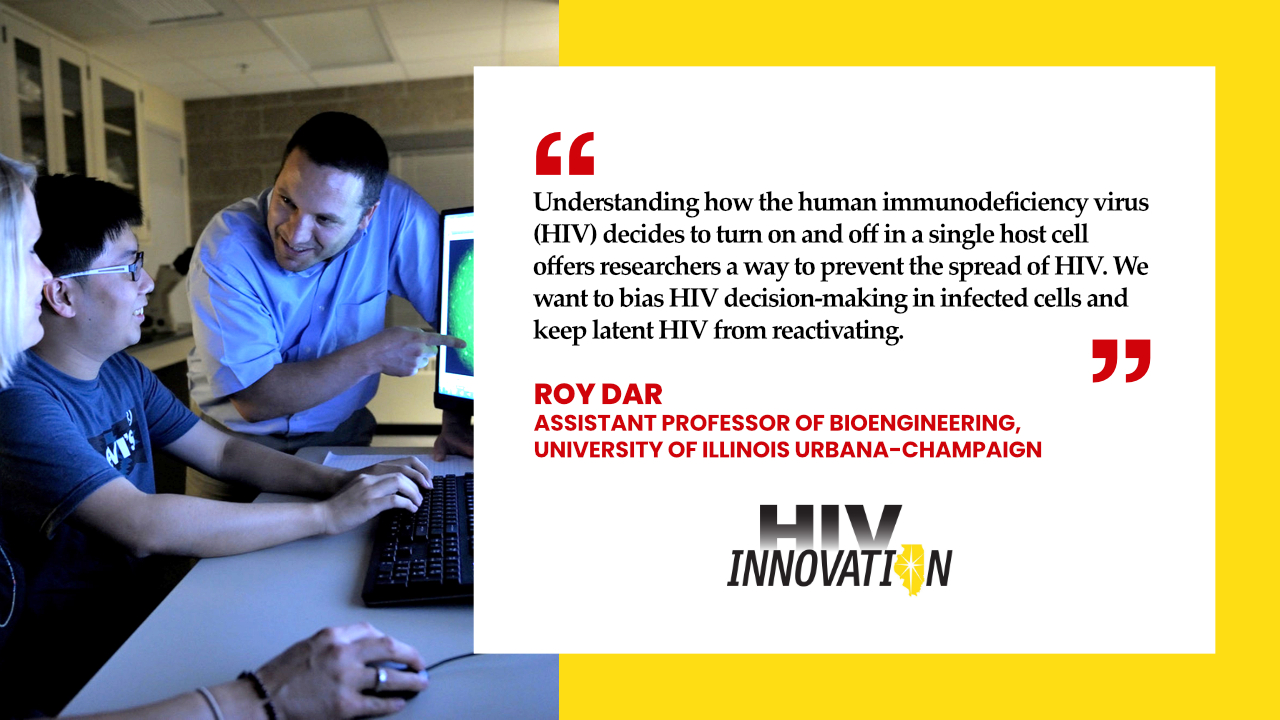 To address this, researchers are aiming to either turn on latent HIV, so the cell harboring the latent virus can go through HIV-induced cell death, or keep the latent virus off, so that ART can be made unnecessary.

Focused on maintaining HIV in the latent state and ultimately finding a cure, a research group at the Bioengineering Department and Carl R. Woese Institute for Genomic Biology at the University of Illinois Urbana-Champaign has identified five drug compounds that suppress the ability of latent HIV to reactivate and thus avoid the infection of other cells with the virus. More tests must occur within their lab and eventually with patient trials to confirm that these drug mixtures silence HIV into latency and potentially offer a new drug treatment.

“We want to influence the decisions these single cells make, and we try to bias their decision making to find out if we can control the stability of HIV latency,” said Roy Dar, head of the University of Illinois research group studying HIV and latency, and assistant professor of bioengineering and electrical and computer engineering. 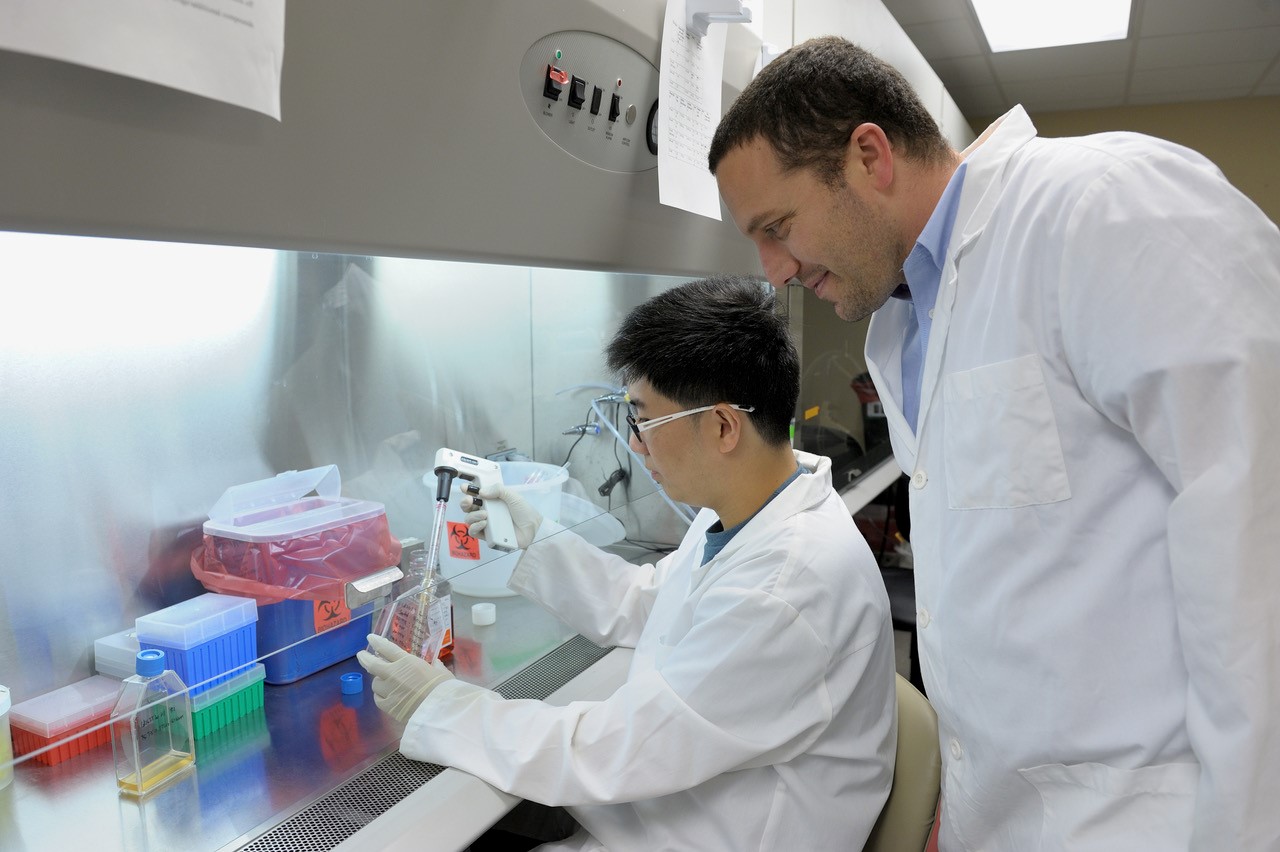 With the leadership of University of Illinois graduate student Yiyang Lu (left), Dar’s research group continues to study the five drug compounds to understand how they work with HIV. Dar (right) and Lu recently co-authored a paper published in the Proceedings of the National Academy of Sciences (Lu et al., PNAS 2021) that describes a drug screen to find compounds that affect the stability of HIV latency.

Cells latently infected with HIV reactivate when a patient stops their drug treatment, skips doses of their medication, or cannot access treatment. Without successful viral suppression through drug treatment, the latent or quiet reservoir of cells continues to produce the virus in small amounts, which increases the viral load or amount of live HIV virus in the body.

The shock-and-kill approach turns on all latent cells so that they highly express the HIV virus. These cells then go through HIV-induced cell death. In this situation, with the patient remaining on ART, they are protected from reactivation of the latent HIV cell reservoir.

“It is hard to reactivate the whole latent reservoir, a challenge for researchers studying the process and looking for ways to prevent HIV infection.”

Block and lock, the opposite approach to shock and kill, turns off latent cells and keep them in a dormant state so they never turn on again. With HIV drug treatment, the cells that usually turn on out of latency would stay off.

“Success with this approach means we could remove the drug and antiretroviral therapy so that the cells stay off indefinitely, which would be the holy grail of this treatment,” said Dar.

Testing and timing single cells in the drug screening

With a microscope, the researchers tracked individual single cells infected with minimal HIV virus, exposed those cells to different compound treatments, and quantified the fluctuations over time under different treatments. They took images of the cells at 15-minute intervals for 48 hours to test more than 1,800 compounds.

They initially found three compounds that stabilized HIV in a latent state.

“We expanded from three to five drugs, which we labeled as latency-promoting agents, after looking at their functional analogs, that is, similarities in their physical, chemical, biochemical or pharmacological properties. We confirmed we can work with these five compounds to understand how their mechanisms affect more relevant models of HIV latency,” Lu said.

Once that phase of the research has been completed, they next will study samples from real patients to understand the relevance and effect of these drugs on HIV latency. Other research groups are working on this same challenge of latency and have discovered drugs that can suppress reactivation of the HIV virus. But that knowledge only strengthens Dar’s determination to continue his research on latency mechanisms and HIV.

“Collectively, if there are enough research groups studying HIV in different ways, I hope we will learn enough about the mechanisms to suppress these cells into a deep latent state,” Dar said. “Like so many researchers, we want to find an accessible treatment to deploy globally. That is always our hope.”