Only two U.S. states have fully decriminalized HIV; Illinois is one of them. More than 100 organizations statewide supported the decriminalization of HIV in Illinois; this coalition advanced passage of House Bill 1063 that Governor J.B. Pritzker signed into law on July 27, 2021. The legislation eliminates threat of arrest, prosecution and incarceration for people living with HIV in Illinois and treats HIV as any other long-term chronic disease. 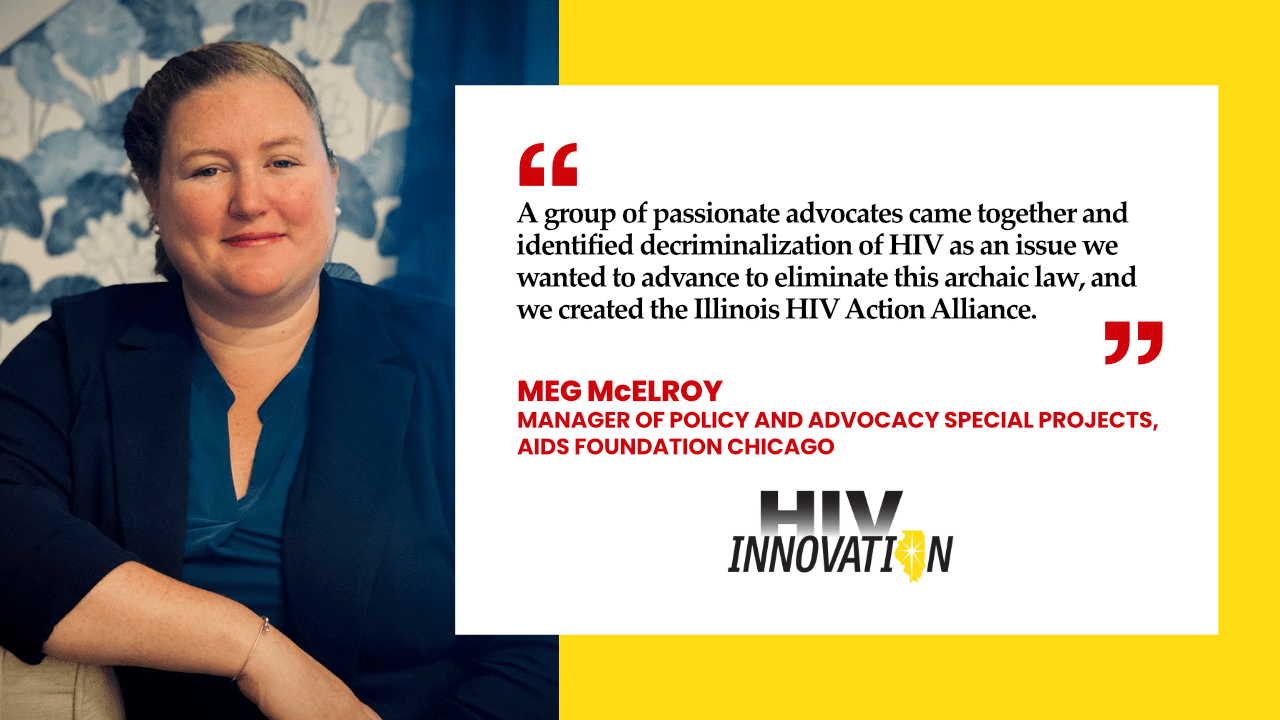 “A group of passionate advocates came together in early 2018 and identified decriminalization of HIV as an issue we wanted to advance to eliminate this archaic law, and we created the Illinois HIV Action Alliance,” said Meg McElroy, manager of policy and advocacy special projects at AIDS Foundation  Chicago.

This alliance evolved into a steering committee of professionals representing leading organizations and individuals influential in their communities. The group met at least monthly to advance this legislative cause. The steering committee included:

During the two years leading up to passage of HB 1063, the steering committee focused on community education and public outreach and simultaneously educated legislators and answered questions their communities brought to them about the bill.

“It was a concerted effort to engage all Illinoisans to support removal of this law. We worked as a small but mighty steering committee to build our coalition by bringing in additional members,” said McElroy.

The statewide collaboration extended beyond the organizations and individuals on the steering committee and included organizations beyond Chicago and surrounding counties with support from Rockford, Peoria, Bloomington, East St. Louis, and other communities including the Illinois Public Health Association, a prominent downstate leader of the effort. By summer 2021, more than 100 community and health care organizations supported passage of the legislation.

The Cook County State’s Attorney Kim Foxx supported the legislation and the Illinois Sheriffs’ Association and Illinois Association of Chiefs of Police did not come out in opposition to House Bill 1063, an outcome not always achieved with legislation affecting the criminal justice system, said Timothy S. Jackson, director, government affairs, AIDS Foundation Chicago. “We are thankful for Cook County State’s Attorney Foxx’s support and advocacy,” he stated.

Illinois coalition partners, such as the ACLU and Lambda Legal, have chapters throughout the country where they strive to advance decriminalization legislation. “The Midwest is leading the way by showing we fully repealed, rather than modernized, the law. We have become the measuring stick,” said Jackson. The modernization of HIV criminalization laws aligns individual state statutes with current scientific evidence about the disease.

However, HIV decriminalization legislation is one step in the journey to eliminate the HIV epidemic as outlined in the Getting to Zero by 2030 initiative in Illinois and nationwide.

“It is such a historic moment in the history of Illinois and within the HIV community, but it is just one moment that will lead us closer to Getting to Zero. We know our work is not done and won’t be done until everybody in Illinois has equitable access to health care and can get to zero with us,” said McElroy.

Passage of HB 1063 is an achievement Jackson said he is glad to “check off the list” of long-term goals.

Those conversations continue through the Illinois HIV Action Alliance Steering Committee and supporting organizations as they educate the HIV community and people throughout the state about the passage of HB 1063.