In 2019, 607 of the 1,286 persons — nearly half — diagnosed with HIV in Illinois were aged 13-29, according to the Getting to Zero Illinois HIV Dashboard. In addition, another estimated 900 young people in this age group became HIV-positive last year but didn’t know it, according to the Centers of Disease Control and Prevention (CDC). As a result, these 900 young people did not receive HIV care and are at risk of contracting AIDS, hepatitis or other medical conditions.

Addressing HIV in youth requires young people to have access to information and tools that can help reduce their risk, make healthy decisions, get tested, and get treatment and care if they have HIV.

How Young People Get HIV

HIV can be transmitted through specific activities. Most commonly, people receive or transmit HIV through sexual behaviors and by needle/syringe use, according to the CDC. Only certain body fluids – blood, semen, pre-seminal fluid, rectal fluids, vaginal fluids and breast milk – from a person who has HIV can transmit HIV. To transmit or receive HIV, these fluids must come in contact with a mucous membrane (found inside the rectum, vagina, penis and mouth), damaged tissue (an open wound, cut or scrape), or be directly injected into the bloodstream (via needle or syringe) for transmission to occur.

HIV may also be spread from mother to child during pregnancy, birth or breastfeeding.

When Should a Young Person Be Tested For HIV?

The only way to know for sure whether you have HIV is to get tested. Knowing your HIV status gives you powerful information to help you take steps to keep you and your partner healthy. The CDC recommends that everyone between the ages of 13 and 64 get tested for HIV at least once as part of routine health care. People at higher risk for HIV should get tested more often. You should be tested for HIV if one or more of these applies to you, as these things increase your chances of getting the virus:

If you’re pregnant, talk to your health care provider about getting tested for HIV and other ways to protect you and your child from getting HIV.

There are many myths surrounding HIV. For example, HIV can only be spread through fluids such as blood, semen, pre-seminal fluid, rectal fluids, vaginal fluids and breast milk. HIV cannot be spread through spitting, kissing, or eating food cooked by an HIV-positive individual. In addition, HIV can be transmitted or received by any individual; heterosexual people participating in risky sexual behaviors or taking injected drugs can have as much of a chance of receiving HIV as a gay or bisexual person does.

HIV stigma is defined by the CDC as negative attitudes and beliefs about people living with HIV. Stigma is the prejudice that comes with labeling an individual as part of a group that is believed to be socially unacceptable. Some examples of HIV stigma are:

HIV and stigma affect the emotional well-being and mental health of people living with HIV. People living with HIV often internalize the stigma they experience and begin to develop a negative self-image. They may fear they will be discriminated against or judged negatively if their HIV status is revealed. HIV stigma is rooted in a fear of HIV. Many of our ideas about HIV come from the HIV images that first appeared in the early 1980s. There are still misconceptions about how HIV is transmitted and what it means to live with HIV today. Lack of information and awareness, combined with outdated beliefs, is what leads people to fear acquiring HIV.

How to Avoid HIV Stigma

There are two core ways to avoid HIV stigma. First, talk about HIV. Talking openly about HIV can help normalize the subject. Talking also provides opportunities to correct misconceptions and helps others learn more about HIV. Second, take action. We can all help end HIV stigma through our words and actions in our everyday lives. Lead others with supportive behaviors. 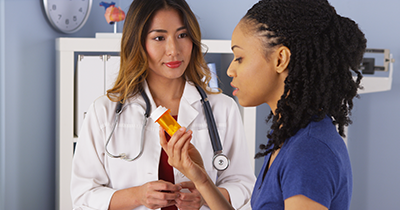