AIDSVu has released the first-ever interactive state-level maps visualizing a 73 percent increase year over year in persons using PrEP across the U.S. from 2012 to 2016, with 77,120 PrEP users in 2016. PrEP, or pre-exposure prophylaxis, is when people at high risk for HIV take HIV medicine daily to lower their chances of getting infected with HIV. AIDSVu’s maps visualize the growth in PrEP use at the state-level by year, and break down the data by age and sex. These data and maps offer important information and tools to public health officials, policymakers, and researchers to inform efforts to improve PrEP awareness and increase uptake where it is needed most. 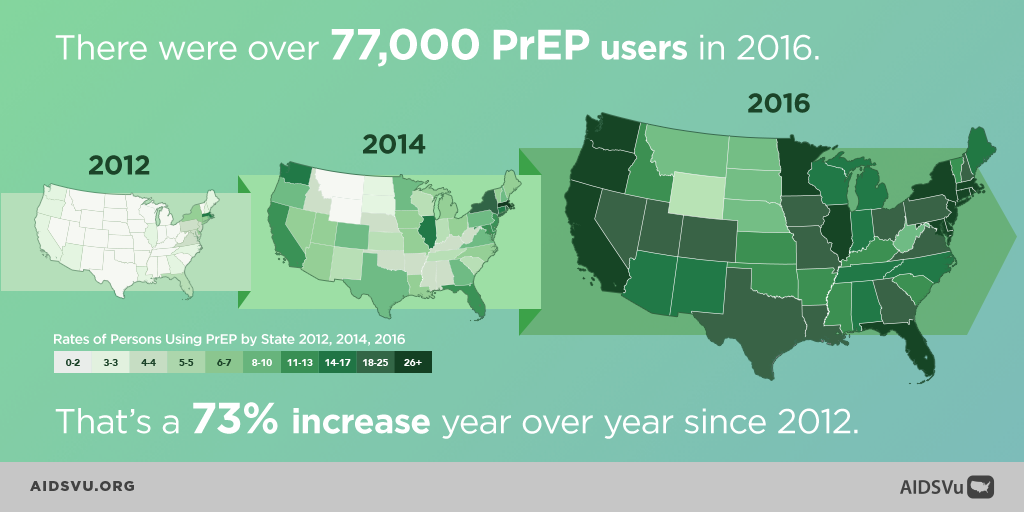 The Centers for Disease Control and Prevention (CDC) has estimated that approximately 1.2 million people are at high-risk for HIV exposure and could benefit from comprehensive HIV prevention strategies, including PrEP. Data presented on AIDSVu reveal that the growth and distribution of PrEP use has been inconsistent across different sexes, age groups, and geographic regions. For example, the Southern U.S. accounted for more than half (52 percent) of all new HIV diagnoses in 2016 but represented only 30 percent of all PrEP users in 2016. That same year, women comprised 19 percent of all new HIV diagnoses but made up only seven percent of all PrEP users.

“PrEP is a revolution in HIV prevention and has the potential to dramatically reduce new HIV infections; however, significant disparities in the use of PrEP exist across the country,” said Patrick Sullivan, Ph.D., Professor of Epidemiology at Emory University’s Rollins School of Public Health and Principal Scientist for AIDSVu. “Expanding access to PrEP is a core component of Getting to Zero campaigns in cities and states across the country and is one of four key focus areas in the National HIV/AIDS Strategy. We hope that the newly available data on AIDSVu will allow health departments, elected officials, medical professionals, and community leaders to better understand and visualize the realities of who has access to this important prevention tool so they can develop programs and policies to decrease barriers.” 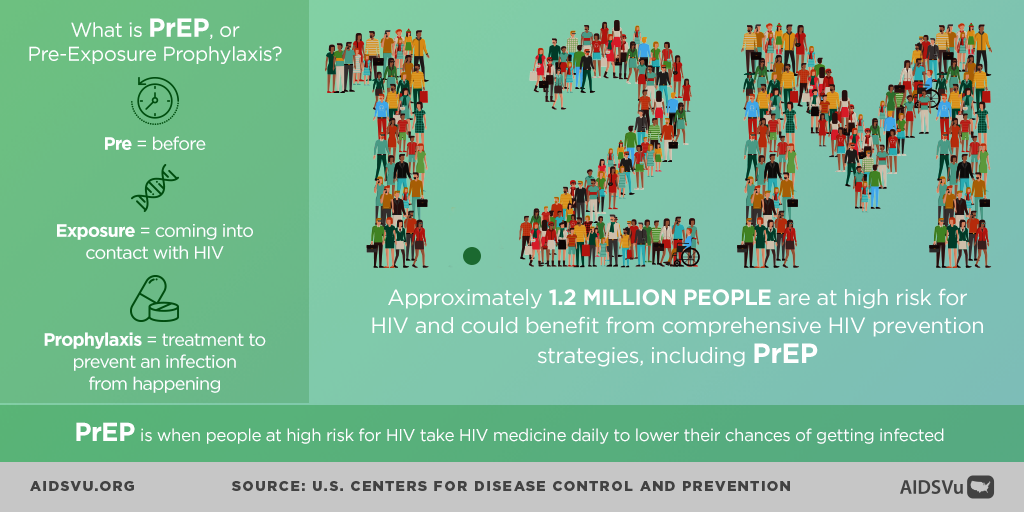 The South is the region with the highest number of new HIV diagnoses in the U.S. but has disproportionately fewer people using PrEP.

Data on PrEP users displayed on AIDSVu represent the number of unique persons who had at least one day in a calendar year of prescribed tenofovir [TDF]/emtricitabine [FTC] (TDF/FTC) for PrEP. TDF/FTC is the only medicine currently approved by the U.S. Food and Drug Administration (FDA) for PrEP use. De-identified, aggregate data were obtained from Source Healthcare Analytics, LLC (SHA) with the support of Gilead Sciences, Inc., and compiled by researchers at the Rollins School of Public Health at Emory University. SHA collects data from over 54,000 pharmacies, 1,500 hospitals, 800 outpatient facilities, and 80,000 physician practices across the U.S. SHA’s dataset contains prescription, medical, and hospital claims data for all payment types, including commercial plans, Medicare Part D, cash, assistance programs, and Medicaid. From this overall sample, AIDSVu presents a subset of data comprising prescriptions for TDF/FTC for PrEP.

There is currently no single data source that includes data on all unique users of PrEP across the U.S. SHA’s dataset is an open sample of commercially available data, which excludes entities that do not make their data available, such as closed healthcare systems.  As a result, the data displayed on AIDSVu underestimates the total number of PrEP users in the U.S. Other publicly shared data on PrEP utilization have used estimates from multiple data sources to project for the total number of unique persons using TDF/FTC for PrEP in the U.S. at a given point in time. This method, however, does not provide state-level estimates.

Now in its eighth year, AIDSVu continues to advance its mission to make HIV data widely available, easily accessible and locally relevant to inform public health decision making. State-level PrEP data on AIDSVu can be viewed alongside social determinants of health and other HIV data, such as new diagnoses, prevalence, and mortality. Additionally, AIDSVu provides downloadable PrEP datasets at the state- and ZIP3-level for researchers and health departments to utilize in their own analyses. ZIP3 refers to the three digit ZIP code prefix assigned by the U.S. Postal Service. AIDSVu is also an inaugural user of the PrEP Locator, a national directory of providers of PrEP in the U.S. developed by Emory University’s Rollins School of Public Health with support from M•A•C AIDS Fund.

AIDSVu was developed by Emory University’s Rollins School of Public Health in partnership with Gilead Sciences, Inc. The project is guided by an Advisory Committee, a Prevention and Treatment Advisory Committee, and a Technical Advisory Group with representatives from federal agencies, state health departments, and non-governmental organizations working in HIV prevention, care, and research./p>

About the Rollins School of Public Health

The Rollins School of Public Health is part of Emory University in Atlanta, Georgia. The school houses six academic departments, 20 multidisciplinary centers – including an NIH-supported Center for AIDS Research – and more than 160 full-time doctoral-level faculty members.