A: I think there’s a lot of misinformation, especially now with social media taking off the way that it has. I think some of it comes from old information that we had. I grew up in the 90s and I watched people dying on TV. It was people talking about AIDS and how everyone’s dying of AIDS. Those images are stuck in people’s minds and we haven’t somehow been able to update them. I think the CDC (Centers for Disease Control and Prevention) has been slow to respond as well, and I also think public health – in their drive to curb, trace, and/or track the epidemiology – didn’t think about the people and they only thought about the numbers. I think sometimes the attack or the approach that these public health agencies took also caused stigma and fear for people.

People living with HIV are doing the work, but we need help with either amplifying our voices or joining in with us in changing people’s minds and updating the information.”

Q: Has HIV stigma had a negative impact on your life, and if it has, how so?

A: At first, there was internalized stigma when I got my diagnosis, and I didn’t feel like I could touch anyone or be sexual or anything like that for well over a year or more. It took a while for me to come out of that internalized stigma. And then my other experience of it has been from the gay community. A lot of people on the dating apps say “I only date neg guys,” so people out there are saying they’re not going to have sex with you because you’re HIV positive.

Q: Can you talk a little bit about some of the high points and low points in terms of your interactions with healthcare professionals?

A: I have to say most of the physician assistants, nurse practitioners, and doctors that I have encountered have been fantastic to work with; however, there was a time when I was living in Colorado and I was in a small farm town in the northeast corner where my folks lived. I had to drive to Denver – which was about 100 miles away – to receive my HIV care. My doctor would order labs and ask me that I do them at the local hospital in my parents’ home town, and when I went to go get the labs done, they wouldn’t draw my labs. They claimed that they didn’t know how to draw the lab, which I thought was strange, and it made me feel like they just didn’t want to. Some of the high points were when I was living in San Francisco. I wound up there and getting connected in care there was so quick and so easy.

At first, there was internalized stigma when I got my diagnosis, and I didn’t feel like I could touch anyone or be sexual or anything like that for well over a year or more.”

It was easy to talk openly in San Francisco about my HIV status. They’ve done a fantastic job of dismantling stigma there. I think they were one of the first cities, if not the first city, to implement treatment as prevention, and it shows. There was also a program I did there called the Shanti Project, which was a support group for people living with HIV. I met people there who had been living with HIV since the 80s, and there were also people in that support group who had been diagnosed as recently as a month prior to me joining. It was amazing to talk to these people. The whole idea of the program was to talk about health as a whole and how to look at it spiritually, mentally, physically, and within a community, because all those things drive a person’s health.

Q: How about employers over the years? Have your employers been relatively supportive or not, or has it been a little bit of both?

A: That was very surprising because again, when I first started taking medication, I was living in that small farming town in Colorado and working at a coffee shop. The owners were very conservative; very kind people, but very conservative. I didn’t know much about what was going to happen when I started medication, and so I just let them know, “Hey, I’m going to be starting this medication for HIV. I don’t know if that’s going to affect me or affect my ability to work, but I thought you should know.” They were very supportive, and they gave me a big hug and let me know that they cared about me not only as an employee, but as a person.

I haven’t experienced discrimination in the workplace – and I consider myself very lucky for that. I’ve worked in careers where there’s a lot of queer people; minus that coffee shop, I got lucky with that coffee shop. But, in San Francisco, I was a makeup artist. Then, here in Chicago, I worked at a gay-owned tanning salon, and now I work at Center on Halsted in the HIV department. It’s very easy to talk about my HIV status, and not only do I find that it’s easy, but I find that it’s important to talk about it.

The whole idea of the program was to talk about health as a whole and how to look at it spiritually, mentally, physically, and within a community, because all those things drive a person’s health.”

Q: How about with friends and family members? Have they been understanding over the years or have you had some issues with them?

A: No. For the most part, they’ve all been very understanding. The only odd experience I had was when I was staying over with one of my friends who I had known since elementary school, and her mom had told her not to share towels with me. And my friend knew better than to worry about something like sharing a towel, but I thought it was interesting that my friend took the opportunity to educate her mom. I appreciated that I didn’t have to do that because sometimes it is exhausting to have to be the one to educate everyone.

Q: With all that being said, what do you think needs to be done to overcome HIV stigma and how would overcoming stigma benefit a person living with HIV?

A: A lot of conversations need to start happening. I think somehow our public health agencies need to be better at messaging, as well as thinking of people not as numbers, but as people, because I think a lot of times in public health, people get lost in the numbers. I also think that we have to learn how to steer and dominate the conversations on social media because otherwise it’s just a world full of old, outdated misinformation.

And speaking of old, outdated information, we have to do something about HIV criminalization laws. They’re awful. I can’t tell you how many people I’ve sat down and spoken with personally that are afraid to go get tested for HIV, because they’re afraid of the consequences.

A: I found The Body very helpful. It’s the best. I have also thought about trying to get a similar program to the Shanti Project in San Francisco started here in Illinois several times. I would encourage anyone to do some research about it, it’s a fantastic program.

In Chicago specifically, I think Howard Brown Health is a fantastic resource. I like to think that I am a good resource along with the staff at Center on Halsted in our HIV/STD Testing & Prevention Services Program. I also have a public persona; I perform in drag as Edna D Mascará. She’s a Minnesota housewife who doesn’t know anything about anything and kind of loves everyone. During the pandemic, I used my picture to try and drive traffic to the State of Illinois AIDS/HIV & STD Hotline (800-243-2437) and the new HIV Resource HUB (844-482-4040). I try to use my persona to engage people and also verbalize HIV; like, this funny Minnesota drag queen also happens to be living with HIV. It normalizes it.

Q: Is there anything we didn’t ask about that you think is important to emphasize about this topic?

A: People living with HIV are doing the work, but we need help with either amplifying our voices or joining in with us in changing people’s minds and updating the information. It can’t just be the people living with HIV, just like with Black Lives Matter. It cannot just be black people doing the work, right? It has to be everyone doing it together to make this change. 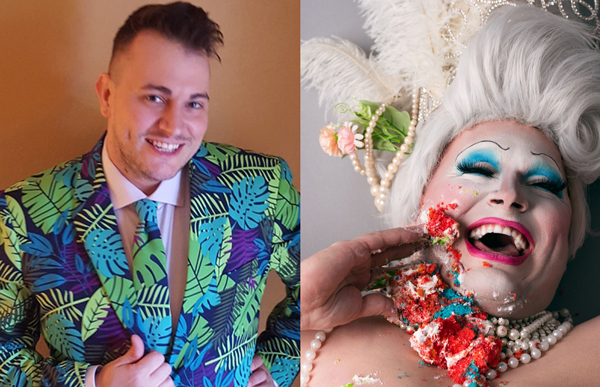