A: Stigma, as a person with HIV, means that you’re not treated equally in one way or another. It isn’t necessarily always something very visible, like a rejection of a date or being shunned by family or a person like that. It could be much subtler and it could also be internalized, so that the person themselves feels like they’re less “normal” or like “damaged goods,” more or less.

Q: Explain a little bit more about what you mean by internalizing it. Is that taking cues from others and second guessing yourself? How does that work?

A: I think, just for myself, I did discuss it with people in my immediate family, but I didn’t discuss it with my rest of my family. It didn’t come out until so many years later and they would say “Why didn’t you feel comfortable telling us? Why didn’t you want to share that part of your life with us?” And it was because I just didn’t know how they’d react. I was expecting a very negative reaction that, having seen friends previously that had been shunned by their family because of their HIV status, I made that general overall assumption that every family was going to be like that. Then, in terms of the dating world, I’m very fortunate that I’ve had a partner now for 12 years, so that’s not an issue for me anymore. But before that, when I was in the dating pool and HIV came up on a profile online or something like that, I’d get shut down very quickly. I realize that was 12-plus years ago, but from what I’ve discussed with other people that are HIV positive, that’s still a very common thing. For the most part, at least in online dating, HIV is a reason to be ghosted.

I think a lot of individuals still look at it from a historical perspective, especially people of an older generation. I think we have horror stories of how the media has portrayed HIV.”

A: I think a lot of it is just a lack of knowledge about HIV. When I say a lack of knowledge, I think I’m referring more to where we are currently with HIV and biomedical advances. I think a lot of individuals still look at it from a historical perspective, especially people of an older generation. I think we have horror stories of how the media has portrayed HIV to be like, such as Tom Hanks in Philadelphia or Matthew McConaughey in Dallas Buyers Club, and that carries on. There’s still that fear/perception that it’s going to be like that, as if nothing has changed since the early days of the epidemic.

Q: Has HIV stigma ever had a negative impact on your life and how so?

A: Oh, like I talked about it a little bit earlier, self-imposed stigma. I found out many years later that there were people in my life that I was withholding things from who could have been a support system for me; I was withholding because I didn’t know how they’d react. And from what I’ve talked about with other people, they kind of feel the same way. They’ve had the same experience. You kind of hold back information for fear of how people are going to react. I did have one employer to whom I disclosed that I was HIV positive soon after I was diagnosed, and their immediate response was, “Well, if it’s going to interfere with your job, I think you should be looking for something else to be doing.” So it wasn’t direct HIV stigma, but it was stigma in kind of a roundabout way. Whatever health issue I was having wasn’t looked favorably upon by the company. This was a very small business, so I think that they would probably have gotten away with it without any intervention from various laws that may have been in effect at that time. But for the most part, I’ve been very fortunate in many ways that I have not had many other negative consequences of my HIV status.

I think making sure at an early age individuals understand that yes, it is a disease that can affect people if it’s not treated, but to normalize it is important.”

Q: Has HIV stigma ever made you hesitant to receive HIV testing or treatment?

A: There were some issues with going to a doctor. I had issues with doctors early on who didn’t understand HIV and didn’t want to have to deal with it, but for the most part I’ve gotten pretty good health care and it hasn’t kept me from going to the doctor. I’ve had one or two (primary care physicians) who were a little bit standoffish as I went through the process to find a primary care physician, but I’m not sure if that was because of my HIV status or the fact I was gay. It could have been one of many factors, I guess.

Q: From whom have you experienced stigma? Has it been from healthcare professionals, employers, family members, friends or acquaintances?

A: I think the big one has been very casual acquaintances and those experiences were  more so when I was in the dating pool. As far as my everyday life, I can’t recall feeling ostracized or anything else. Disclosing my status is not something where I go out there and say, “Hi, my name is Mike and I’m HIV positive.” It becomes a part as an ongoing conversation where I feel comfortable enough to disclose.

Q: Do you think that’s because you’ve been fairly selective in terms of telling others your status?

A: I think so. I’ve never been in a health crisis or anything like that because of my HIV status, so that hasn’t been an issue. I’ve been healthy the whole time. And I don’t have medication side effects or those kinds of things. Those kinds of things can trigger you feeling the need to explain to somebody why you’re having these medical issues that are possibly HIV-related. Whereas as for myself, I’ve been very fortunate that that has not been an issue.

If individuals are a little more open about their HIV status within their circle of friends and acquaintances (not necessarily publicly in a broad sense), that might help lessen that stigma.”

A: I think putting the message out there that we are normal. All of us living with HIV are normal people. I mean, okay, we have this virus but that’s not defining us. And I think that we’re still working on taking that shift from something that we allow society to define us as when it’s just one of many things that we may have going on. No different than diabetes or high blood pressure or heart disease or anything like that. HIV is a part of life for a person living with it. Back to the education part, I think making sure at an early age individuals understand that yes, it is a disease that can affect people if it’s not treated, but to normalize it is important. I think that we’ve been making strides with the fact, for example, that there are HIV medication advertisements on TV. I think that these things that society is doing to normalize HIV is a big way to break down that stigma.

Q: How would overcoming stigma benefit a person living with HIV?

A: I think possibly with de-stigmatizing it, they may feel more comfortable reaching out to other people and they wouldn’t have that fear of rejection. I think that some individuals that are positive could use the support because they have no natural support network. They’re out looking for a support network. They might feel and/or experience less rejection if there was reduced stigma behind it. If individuals are a little more open about their HIV status within their circle of friends and acquaintances (not necessarily publicly in a broad sense), that might help lessen that stigma. Of course, you’re going to be wanting to do that within a safe space, but I think that with less stigma, people would feel more comfortable about doing that.

A: I was very fortunate. I was first diagnosed at a time when there were various online chat rooms that were HIV-specific. There was also a bar in Chicago that had get-togethers maybe one or twice a month for people with HIV or their allies. Those things would help to see that I wasn’t alone. Today, I don’t notice that nearly as much of that as there once was. There’s a few people within the community that people gravitate towards. We do have care navigators in our local health district. I was able to access a variety of medical professionals before I had insurance. I was able to access mental health counseling for addressing long-standing issues that were compounded by HIV.  To be honest, it was because of those local resources that I started going to a doctor on a regular basis. As far as specific educational materials, online resources like Positively Aware and The Body are good resources for educational material. 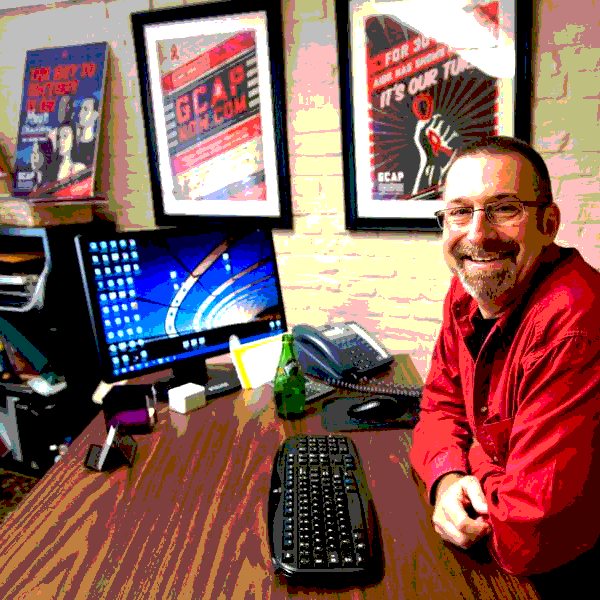